On 20th April through to 23rd April 2015, a severe storm system hit the Hunter Region leaving a huge amount of damage in its path. This system caused flooding and brought winds up to 135kph with it. SES recorded this as the worst flood and storm system in a century to hit the Hunter region.

Approximately 36,906 animals were found dead or drowned, some included natives. 2,358 had fodder drops, which also included some macropods stranded in behind Maitland, Kurri and Dungog areas. Some 1,680 animals were relocated by DPI and RSPCA officers including one stranded wom­bat that was air lifted across a swollen creek to safer ground. Sadly two koalas died from trees falling and were found by rangers in the Watagan Forest and many other species were left distressed and confused with habitat loss. The Rural Fire Service had 140 trucks in the field recovery operation and also used aircraft to assess areas. Ausgrid recorded 200,000 without power that went on for some weeks. They had 90,000 calls for assistance.

Hunter Wildlife Rescue (NATFInc) Disaster Coordinator Audrey Koosmen, spent 2 full days with SES and DPI in field coordinating wildlife rescues and placement.  11 echidnas were moved to safer ground, 8 were found drowned; rescued were 9 snakes and 11 lizard species holding onto houses and drifting wood. Of the 14 possums rescued, only one survived over the three days of the storm.

Many vet clinics were closed due to damage and power loss and those open could only deal with less serious cases. TheRSPCA Newcastle and Rutherford as well as Newcastle Animal Referral and Emergency Centre (NAREC) at Broadmeadow were wonderful through­out the incident, taking many wildlife species in for assessment and treatment as well as several other vet clinics who gave their support in helping the fauna received.

Communication breakdown was the biggest headache for everyone – Telstra had 100 sites down, Optus 75 sites down and of course other providers were down as well. These resulting communication problems meant that many calls for wildlife assistance could not reach our 24 hour Emergency Hotline and those that did, finding members to assist who were not dealing with their own personal or property loss was an added challenge. Many members lost trees, fences, rehabilitation enclosures, vehicles as well as power and other contact with the outside world and yet their resilience and sense of humour prevailed. One member with several fallen trees quickly turned the disaster into an abundant access to fresh leaf for the possums undergoing rehabilitation!

The response time for wildlife assistance was also limited due to the continuing dangerous conditions on the roads which were flooded and covered in fallen trees and electricity wires, mak­ing SES declare much of the area a lock-down disaster zone. People were asked to stay at home and stay off the roads. At this time, the Hunter Wildlife Rescue (NATFInc) priority became providing advice to members of the public rather than immediate rescue. As the storms abated, the role of Hunter Wildlife Rescue (NATFInc) was in search, rescue and re­covery. Our emergency response plan was then activated and fauna drop-off points were established.

After any disaster, the work of wildlife rescue for rehabilitation groups begins in earnest a week later when people are cleaning up, when Councils start cutting down and removing fallen trees, fixing destroyed enclosures or farmers finding injured animals on their property. The biggest immediate problem from the storm incident was displaced fauna. Possums of all species were badly affected with many members of the public calling for advice about having possums on their proper­ties, in roofs and sheltering in very strange places. Many possums and gliders remaining in the hollows of their uprooted trees, if not injured by the fall, were particularly vulnerable to dog or cat attacks. Our volunteers were on-call for many unusual and complex rescues including a won­derful rescue recovery operation in remov­ing two male possums that had found their way down a chimney and into a very confined, enclosed space above a fire-place during the storm. Hours were spent assessing, planning and car­rying out the rescue of both possums, coordinated with the local New Lambton Vet Clinic to attend to se­date both animals. Sadly the older possum didn’t make it but the younger, stronger male has recovered well and has been successfully released back into his home range with a brand new possum box.

In the Maitland area there was an increase of road kills of macro­pods due to displacement, with several orphaned joeys coming into care. Many reptiles were washed away and ended up in strange areas such as shops in Maitland where Maitland SES and Cessnock VRA supporting us in rescuing many of these reptiles. Two land turtles were found stranded in rock pools at beach­es, perhaps brought down by flood water. Wombat burrows became flooded and there were reports of wombats living in a farm barn and under a house, and in both cases property owners were happy to allow the ani­mals to remain. Echidnas, wombats and other ground dwellers who could not escape the fast rising flood waters were sadly drown. However bitter-sweet euphoria reigned when a young wombat (pictured above) was rescued after her mother drowned. Although sick and requiring intensive care, she is now stable and recovering with the expert help of one dedicated volunteer.

Birds also became victims of the storms. Many were killed and injured, and the wild seas saw the rescue of many sea birds including our migratory shearwaters that were blown off course on their way north to the Bering Strait between Alaska and Russia, with detours as far inland as Muswellbrook and Singleton.  Other oceanic seabirds were found exhausted and grounded. There was an influx of baby rainbow lorikeets where their habitat hollows were destroyed as well as an increase in the number of waterlogged tawny frogmouths and kookaburras requiring rehabilitation.

For Hunter’s wildlife, the recovery phase from such a storm incident will have a long lasting impact for many who have lost habitat hollows, trees or burrows and are finding themselves in precarious and dangerous places such as down chimneys and in drains. The continuing rains have compromised the remaining habitats, and Hunter Wildlife Rescue (NATFInc) has seen an increase in wombats and possums coming into rehabilitation with pneumonia and high parasitic burdens; mange is increasing with the high humidity and damp burrows; the many wildlife reliant on nectar such as flying-foxes, gliders and birds, will shortly start to suffer the effects of starvation as the continuous rain washes the last remaining autumn nectar from flowering blossom trees still standing. For our wildlife, the impact from the destruction of so many food and habitat trees as winter approaches will continue for some months yet. While spring may still be several months away, our hollow breeding kookaburras, parrots and owls will all be eventually vying for the limited remaining nesting sites and some may end up losing a whole breeding season.

Our recovery work will continue for several months to come as we witness the effect of wildlife being displaced throughout the Hunter. Tens of thousands of native fauna died or were affected in this storm incident so every animal that Hunter Wildlife Rescue (NATFInc) volunteers’ res­cue, and survives, are the very lucky ones.

Below: When burrows are flooded, any tight space will do!! 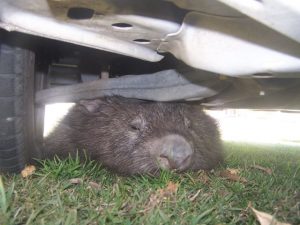